I want to talk for a bit about something I sometimes see in RPGs (and, less often, in other games): mechanics that resolve one thing while producing a side-effect for something else. For example, critical hits in D&D, divine interventions in In Nomine, and the complications/opportunities system in the Leverage RPG. For the purposes of this article, a side-effect mechanic is primarily about one thing (whether you succeed at something, generally) but that produces a side-effect that is taken into consideration elsewhere in the game. 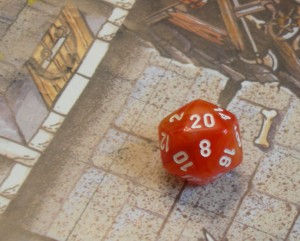 That's the way I roll

First, though, I’m not a huge fan of side-effect mechanics. I find they usually add more complexity than benefit. They can be jarring if the side-effect is something fairly removed from the original thing being resolved. Side effects have to be balanced such that they work with the core mechanic, neither ruining its original feel nor making the secondary effect insignificant. In short, the whole concept is troubled from a design perspective. Still, there are times when it’s completely appropriate. Where and when is the key question.

Let’s talk about critical hits in D&D. At first glance, you might see these as not really side effects and in some ways, that’s true. In 4th edition, critical hits are simply a damage boost with perhaps a status effect. However, in prior editions, and in most 4th ed games I’ve played in, critical hits have some sort of sideways narrative effect. That is, the opponent is staggered, decides to really cut loose, holds a grudge and attacks the person who crit them, or some other action based on the fictional side-effect of critical effects being “bigger”.

In D&D, critical hits are a tradition. All sorts of house rules get made around crits. Their existence shapes how stories in D&D get told—who hasn’t had a fight go their way because of an opportune critical that changed the tide of battle? But also look at the circumstances in which they hold weight: typically, D&D has many rounds of combat where players are taking effectively the same action every round. Critical hits add some much needed variance in all that monotony. I can’t help but find D&D criticals to be a patch to an otherwise clunky combat system—a sort of fake interestingness. A necessary patch, to be sure, but unsatisfying in the end. 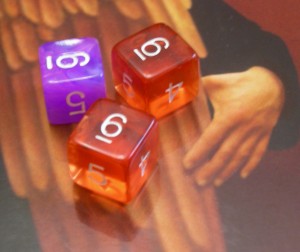 In Nomine‘s side-effects are slightly more interesting. In the d666 system, there are actually two side-effects: efficacy and interventions. A player rolls two dice to determine if the action is successful and the third to establish the efficacy of that action. When one rolls all ones or all sixes, a kind of critical hit called an intervention occurs. In Nomine‘s interventions are much more narrative than a D&D critical; but then, In Nomine is a much more narrative game than D&D so that comparison might be expected.

The interventions are absolutely in theme with the game and add a lot of value. The inspiration that the ineffable nature of the divine plan might lead to seemingly random interventions from heaven or hell really comes through. But the efficacy mechanic is overcomplicated—many powers play with the check digit, there’re all sorts of rules that tie into it, and the amount of damage one does in an attack is determined with it. The problem, though, is that there’s not enough room to express complicated multi-variable results with a single die. Since the system really only has one die-roll mechanic, everything has to fit in that box. If the game didn’t have so much charm, it’d fall flat on the mechanic.

In Leverage, both the GM and players roll opposed rolls. When either side rolls a one, these dice turn into narratively significant events. When it’s the GM, these are called opportunities, and when it’s the player, they’re called complications. Sometimes both happen in the same conflict. There’s a resource economy that can come into play that can magnify these circumstances, and a lot of the talents depend on them occurring… one really gets the sense that complications/opportunities are a first-class mechanic and not an afterthought.  Since Leverage is a constant tug-of-war between the GM and the players, these events are really there to give the GM a random source of “hey, now’s a good time to change the story” without the players feeling betrayed.

Not as bad as it looks…

Because one expects to be rolling at least two and often four or more dice at a time, the odds of events occurring is surprisingly high. This is good, because Leverage is a heist game, and heist games need complications to crop up. Since success is so common—the rules go so far as to say that the GM should assume that the players will succeed in conflicts—rolling is more an exercise in seeing if there are complications or opportunities than whether the thing being resolved is successful. This is a really compelling change-up: the side-effect is actually the focus of the roll.

Two things make side effects work so well in Leverage. The first is that the mechanic of a stream of somewhat random, yet commonly occurring complications and opportunities really fits the theme of the game. The second is that the side effects are not some simplistic modifier or overloaded mechanic, but a full, welcome part of the system. The designers of the system really accepted the challenge of integrating the side-effect into the rest of the game. These two criteria—theme and integration—are how I judge most mechanics, those with side-effects included.