Reading through Leverage, there’s something very interesting to be learned from the section on creating a job. In Leverage, both the show and the game, the crew’s marks are pretty much always rich and powerful, guarded by as much physical, financial, and legal protection as they want. Yet they are all still vulnerable.

There’s always some combination of a character flaw and valuable resource that can be used to get at the mark. The flaw need not be a flaw in the traditional sense—they suggest “loyalty” as one—but it is certainly a chink in the armor. The resource runs the range from something the mark wants—acclaim, more money, that particular painting—to something that the mark wants to avoid, like equally powerful enemies who just need a chance to strike.

And this is why you should never worry about “balance” in a game.

If everyone at the table is doing their job right, if they aren’t burned by hostile GMing, if they aren’t OK with the idea of their character living like a hermit killing anyone dangerous to them and avoiding any connections, then there is always leverage to apply, no matter their size. Some way in which it is difficult for them to achieve or protect what they want. 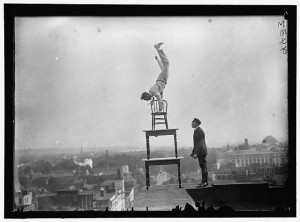 What a place to balance.

Balance is a bit of a myth, in some senses. There’s not a point-based system out there that can’t be broken, and it’s not for want of trying. Shadowrun does an amazing job at trying to make the various methods of powering up your character mutually exclusive and equally costly, but you can still break it; for a system where the normal maximum Strength stat for a human is 6, the ability to make a perfectly legal starting character with Strength 22 is a bit of a balance issue. It’s just an issue with point-based character creation systems with enough complexity to be interesting. And it’s arguably not a flaw, just an issue.

But games that let you be awesome should be unashamed of this fact. In the indie community, we’re learning this lesson and applying it, but it’s good to remember that giving characters, and even players, power in the narrative world is not in any way inimical to interesting stories, as long as you know that there are always chinks and cracks and soft bits. Even Smaug was mortal.