Just a reminder: we’re not going to be posting as much until we get In a Dragon-Guarded Land out the door. We’re aiming for the first of April, but that release date may be a joke.

I’m a big fan of Bully Pulpit’s games. Lately, we here have been playing some Fiasco, and dissecting it a bit. It’s caused me to do some thinking about what a GM is and does. This is particularly timely for me, as I am trying to decide whether Et in Arcadia Ego needs to have a GM. Both of the other games we’re working on clearly do—In a Dragon-Guarded Land because someone needs to represent adversity and the temptation of evil, A Piece of Work because someone needs to represent the target of the heist. But Et in Arcadia Ego is a game with much more room for player-versus-player interactions, and may not have a role for a GM as such.

Some months ago, Robert Bohl started this interesting thread at Story Games that got me thinking about what I like to call GMderfuck, or GMderqueerness. He talked about breaking down the GM-ful/GM-less binary and instead talking about how GM-ly authority gets distributed1. I think a lot of games that are “GM-less” actually have done this. Let’s look at what are, to me, the classic examples of GMderqueer games: Polaris, Fiasco, and The Shab-al-Hiri Roach.

With the caveat that I’ve not actually played Polaris, I can say that the division of authority in the game is very clear. The system is really a compromise system, a system for guiding people to a set of outcomes that they can all live with. When all of that fails, and someone speaks those dreaded words “IT SHALL NOT COME TO PASS”, authority passes to a single roll of the die. Beyond that ultimate authority, authority over characters’ wills and actions are divided around the table, with non-protagonists classed into three groups and divided among the three other players.

In The Shab-al-Hiri Roach, arbitration of conflicts comes down to dice, but authority over non-protagonists is freewheeling and ad hoc. The interesting bit of GM-ly authority in the game is contained in the list of Events, and the deck of cards. The pacing and arc of the story is contained, in some sense, in the book, and is invariant—six Events, at each of which there must be at least one scene and three given non-protagonist characters. The small-scale detail of the game is given form by drawing cards, and having to obey them. This provides a certain randomness at the scene-framing level. 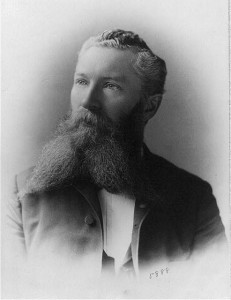 This man has Authority. In his beard. And his name.

Then we have Fiasco. Here, players either choose to set a scene or resolve it, but positive and negative outcomes are limited resources. Each time the other players resolve a scene for you, it is driven not just by fictional considerations but also by some meta-fictional considerations—how much success or failure are they leaving, and how balanced or imbalanced your dicepool is becoming for the two points where the book itself plays GM—the Tilt and the Aftermath. Halfway through, and right before the end, you use the dice in combination with tables in the book to jolt the story, or resolve it.

So does Et in Arcadia Ego need a GM? This question boils down to whether it would be better to combine these kinds of authority in one person, or not. I’m still undecided, but I think that the resolution systems can handle arbitration sufficiently, and the adversity can largely come from the other players. But I think that the setting might require some adversity from non-protagonists, and centralized control of such characters.

Am I missing anything else that might contribute to GM-ly authority? How might a game based heavily on Jonathan Strange & Mr Norrell and Pride & Prejudice need or not need someone with GM-ly authority?