This is a really quick thought, that just came up in conversation with Austin:

There are two (relevant) axes to consider when comparing RPGs to other media: interactivity vs. passivity, and visual vs. verbal. Here’s a chart: 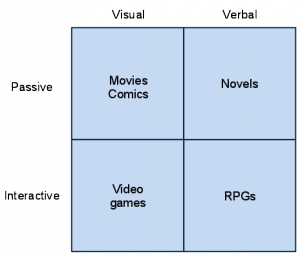 Interactive vs. passive is a slightly different kind of axis—it’s more about how you desire to experience a story. But it also alters the landscape of what you can tell to a degree—interactive stories have a hard time with certain kinds of reveal and inevitability, but interactive stories can gain a kind of plausibility through avoiding certain “we have to split up in the haunted house, it’s required by the genre” stupidity.

Now, there are two important things I want to ask: what other properties of these categories am I missing; and where does theater fit on here? Traditionally at least, it’s passive, but I’ve been to some experimental theater events that strain that boundary, and it’s a lot more verbal than comics or movies, but hardly wholly so.

We’ve not been posting much lately. We’re working on finalizing Dragon-Guarded Land, and that’s taking a lot of our time. I hope to get back to more frequent posting—and of course, more frequent thinking!—about games soon, though. But what will be really exciting is getting this book finished and out there! This is going to be our first release, and there’s some palpable excitement around here.