I’ve been talking with Alex P. about the theory of multi-party Magic: the Gathering games. He brought up the idea of exploration of the design space as a valuable resource. Magic‘s designers have defined a large and interesting (but easy-to-grok) design space, and have gradually been exploring it.

So, I’ve been wondering how this might relate to RPGs. The well-explored routes seem to be either

What I’m suggesting, I guess, is to release one book that doesn’t fully explore the space defined by the rules, and when more books come out, have them stay within the bounds defined by the premises of the rules, rather than add new space to the rules.

To make a concrete example out of Magic: the rules-space says the players take turns, cast spells, some of which stay on the table, some of which go to the graveyard. Creatures (a kind of spell that stays on the table) can attack players and block attacks from other creatures. Players draw, do damage and prevent damage and undo damage via different kinds of spells. The cards then tweak this by providing specifics, rather than by expanding the space of actions. For example, the keyword “flying” changes the space of attacking and blocking. The keyword “flash” changes the space of playing cards. And so on. It explores in depth, rather than in breadth.

I think that in an RPG, leaving things out would just annoy and alienate potential players. It would feel gimmicky and like you were holding out on them. And, honestly, you would be. But there’s an alternative.

A lot of RPG designs have a powerfully generic impulse in them, because you want to be able to handle the infinite variety of imaginative impulses that happen at the table. So, for example, in Dogs in the Vineyard, you have two classes of actions: conflicts, where things that could interestingly go two ways are at stake, and everything else, where you just say “yes”. This is good and allows every conflict to be handled in the same terms. But it very thoroughly covers the design space of the game, and doesn’t really allow for more content.1 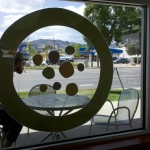 This coffee shop's logo looks like AW's use of its design space. The dots are moves, the circle is how moves work.

So, the alternative is to throw out this urge towards the generic. You see this in, say, Apocalypse World or its children. The design space is well-defined, but the actions within it are an initial smattering of the most important. As you need more actions, you can explore the space more deeply. To make that concrete: the game of Apocalypse World works like this: when you do a thing in the fiction, you do that game-action, if it exists. You roll dice and add some modifiers, and hit one of three (or four) pre-defined ranges, that are, roughly: bad, qualified, good. This leaves room to push deeper into the space as you need to, and leaves room for more content to come out without expanding the space.

Now, here’s where one must be careful: the “supplement treadmill” can fill up such a space quickly, and it can be hard to tell the difference, sometimes, between a new move (or power or whatever) that explores deeply and one that explores broadly. I think that, for example, while many of the books in the Vampire: the Masquerade line included things that pushed deeper, they often included things that pushed wider, adding new ways to interact with the game.

What I would really like now is a rubric for distinguishing deep-additions from broad-additions.