So, this is a bit of a continuation of some thoughts from my last post on continuing content. Quick recap: we know that we can make things of a certain sweet size that we can release to keep a game thriving and active. A modular design, particularly with enough areas of traction, makes it easier to make these sorts of things. Now, onward.

I had sort of shelved the notion, thinking that, for my purposes, it was wrapped up. Then, I read this post by the inimitable Simon Wardley, and it got me thinking again. Go read it.

So, one of Wardley’s recurring themes is that of the curve a product takes on the path from innovation to commodity. And that, ultimately, is what he’s talking about in the post I linked above. He’s saying that Apple, under Jobs’ leadership, thinks that it can live forever in the “innovation” part of the curve and never move to the “commodity” part. 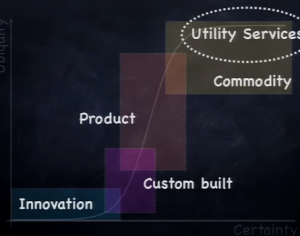 I think that this applies to RPGs as much as any other product of human economic activity.

The auteur model of indie RPGs risked living in the “innovation” area, and trying constantly to hold on to consumers through new and weirder things. Not strictly bad, especially when the field you’re working in really is new, and has room for weird things that work. But not sustainable indefinitely. Any product, to grow, needs to innovate off a stable platform. So you need to move from innovation to product to commodity, so you can make new innovations on top of that, in a refreshed and more-better way.

And this is exactly what I think this continuing content model does, with the added kicker of opening up a participatory ecosystem. It makes the game elements more like a commodity, allows many people to participate in the growth of the game, and generally stabilizes the game up at the top of that curve.

But what I realized is that this is not at all new. The biggest and baddest example I can think of of this sort of lifecycle is the OGL. D&D was made, at that point, entirely into a commodity, and became a platform opened for others to work on. And, really, you start to see this with indie-game hacks of any sort, but it’s particularly visible in things like small hacks of Apocalypse World, or the various Hackbirds. The games have become commodities, and thus stable platforms for further innovation—and ecosystem innovation in particular.

As a final note, I think that this curve applies to the process of creating a game in all situations, though many games top out as products. You begin with an innovation, a new idea particular to your head. You grow it into a custom-built game, making playtest packets when and as needed. Finally, you finish it, write it, edit it, brand it, lay it out, whatever, print it. And it’s a thing in the world. But when it becomes a common currency for other people to use? Yeah, you’ve made a commodity.