We recently played How We Came to Live Here—a game about playing in a myth derived from the cultures of various Pueblo peoples. When I first picked up the game, I had concerns. One was about the appropriateness of my taking a role in a Native American myth, but that’s a post for another day. The RPG takes pains to be sensitive to these issues and goes out of its way to build a bridge for someone like myself to be involved. I believe in the good intentions of the work, and it communicates respect for Native American culture in every paragraph.

But in doing so, it remains quiet on gender issues that I think ought to be addressed. 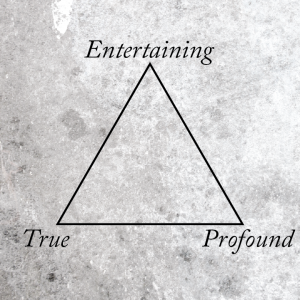 Rare is the game that is simultaneously entertaining, true, and profound. Usually one of the three gets sacrificed. I gleefully sacrifice truth for something entertaining and profound. I usually avoid games that are profound and true, but not entertaining: Kagematsu or Grey Ranks or Steal Away Jordan. Those works are artful and important, but they require an emotional preparedness that I find daunting. We had a similar barrier with Mispent Youth. We didn’t feel like we could give the game the emotional investment it deserved, so we didn’t play.

Some role-playing games have to ignore specific issues to be in that entertaining/profound space; Victorian-era games often avoid discussion of class disparity, games about the roaring 20s often gloss over racial issues, and many sci-fi settings presume most isms have disappeared by the time the game opens. To some extent, I’m down with this. Games serve many functions, one of which is to escape from the prejudices we encounter every day. But sometimes, those issues can’t be ignored, especially if not explicitly called out when present.

Strong gender roles are prominent in Native American cultures. Tasks are divided into women’s work and men’s work, and it’s taboo to cross those lines. Homosexuality is likewise taboo, though being transgender is not. These are baked into How We Came to Live Here‘s system. Doing the work of another gender corrupts a character, and is manifested as hardships in life, all the way up to transforming the character into a monster to be feared and hunted by the rest of the village. As such, these issues, and the cultural norms of the Pueblo people, are enforced by the game which makes them—like it or not—a large part of what the game is about.

I feel like How We Came to Live Here deals with the very difficult issue of gender too factually, too dispassionately. These issues are presented with hardly a discussion, up to and including assigning corruption point values to rape. Playing the game, I became increasingly uncomfortable and aware of my own privilege as a man to talk so casually about gender roles. As such, it quickly became a different game than I’d set out to play.

Sometimes things can be improved in a game text by keeping a watchful eye specifically for portrayal of gender, race, class, and other forms of privilege. Becoming Heroes went through several edits to adjust for our unconscious biases. We edited to try to portray women, particularly women heroes, as being capable and self-determined. We edited to avoid light-versus-dark analogies. We tried to include examples and names from diverse cultures. We did this to consciously address our own privilege and make a game that anyone can play without running into the typical laundry list of biases found in RPGs. Whether we succeeded is not for me to say, though I know the game is better for the effort. I feel like this is something all projects can benefit from.

But sometimes, no amount of editing can remove those barriers and it’s then that those issues need to be explicitly called out in the text. How We Came to Live Here is a fine game and does what it sets out to do, but needs to tackle the inequality of gender directly. In so doing, I think it would shift the game away from entertaining and profound and towards profound and true. I think that would all around make for a better game, even if, after that’s done, it’s not the game for me.