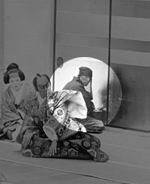 That’s Latin for “the art is in concealing the art”. I’ve long held it dear as a motto, through work as a stagehand to work as a systems administrator. In both such jobs, the pinnacle of achievement is to do your job such that people not only don’t know you’re doing it, but forget that it’s even a job that needs to be done.

In kabuki, the stagecrew go so far as to remain on stage, wearing all black, but being not-seen by convention—and by skill. It’s possible to generate enough of a somebody-else’s-problem field that you can be on stage in front of an audience, and no one in the audience really notices you or remembers that you’re there.

So, as long as we’re talking about mechanics, I think that this is what mechanics should be. We of course cannot get them wholly out of our awareness, because if they are the stage crew of the game, we are not just the audience of the game, but also the director and actors. However, if mechanics do their job right, you don’t think about using them.

This is a tricky point to hit, I think. I think that we might have hit it with In a Dragon-Guarded Land, by making the mechanics so simple, but Dogs in the Vineyard is still instructive, in that the system is clear without being simplistic. I think that there are three main ways in which the system in Dogs achieves this:

So I’ll strive for these.