People come and go. Sometimes, someone who starts with the best of intentions can’t make it past the first session of an ongoing game due to any of the various slings and arrows of life. Sometimes, a friend is in from out of town for the weekend, and you want them to join.

Some games have beautiful design, but at the cost of being rigid in the face of these considerations: Smallville, for example, doesn’t handle people coming and going very well. Nor does Polaris. Both of these are beautiful games, and if you can get a reliable group, are, I imagine, fantastic.

I want to design games that can have the best of both worlds—the cohesion of a storyline where the same characters reliably recur, and the tolerance for real-world exigencies of games that don’t rely on people showing up all the time. One way to do this is to break the character-monogamy attitude. This leads to another problem, at least potentially: a character played by a rotating band of folks can be incoherent, with no consistent characterization or motivation.

So, are there other ways to do this? I hope so.

First, let me acknowledge a risk: this could be a case of a technical solution to a social problem, which basically never works out. That said, what technical solutions might arise? In a Wicked Age gives us one interesting answer, with the characters assumed to not recur between sessions. But there’s a hidden assumption here: this only works if each session has a complete narrative arc—a good stopping point, with no “to be continued”.

And therein lies my notion: the best technical solution is one that encourages and enables complete stories, or at least episodes, per session, without any “to be continued”. The campaign model inherited from D&D is one where you try to get to a reasonable wrapping-up point each session, but still have the characters in the middle of the wilderness, or a dungeon, or a dangerous city, with no option to go off and live their lives. This makes someone missing the next session awkward. But consider a TV show as a model; there are characters who recur regularly, but an actor can take a leave of absence without too much trouble if their character is assumed to have a life between episodes. 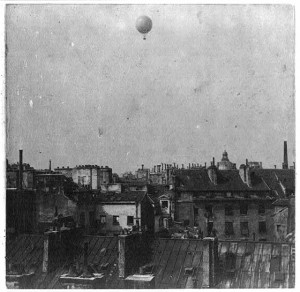 Whoever is not in the balloon will be hard to work into the next scene.

All of this suggests that having session-pacing mechanics, as well as scene- and story-pacing mechanics, may be a good idea. These mechanics should be given some status, too, rather than tacked on—if you have a game like Smallville, where it very nearly relies on all characters being present for a given session, you should also include some specific information on what to do when someone isn’t. How does a mechanic based around a social web deal with an absent node? How does an advancement mechanic deal with some people being present more often than others, without anyone feeling cheated? These are questions to be sure to answer if you want a game to be robust in the face of people coming and going.

I think that the general observation here is that it’s worth looking at the things people deal with in an ad hoc fashion. A lot of the warts people work around in games (and particularly traditional games like D&D) are indications that there’s room for some thought and mechanization—for whatever value of “mechanics” you use—around those areas. The indie RPG community has done a lot of work on other areas, but scene, session and arc pacing mechanics are, I think, just emerging.

Oh, and speaking of practical matters, visits at this blog are up 1,444.64% since the start of the month! That’s a totally useless number, of course, since the blog is only a month and three days old. We’re having a little party here to celebrate our monthaversery.