For the purposes of this post, a mechanic is a set of procedures, defined by the game, that players go through at a table to resolve a conflict of player interest with respect to the world of the fiction. It may rely a lot or a little on randomness, but that’s not the point. The point is that this is something that the game designer has laid out as the way to sort out cruxes in the game’s story.

Right now, I’m working on Et in Arcadia Ego, a game about magicians in Regency England. It owes a lot to Susanna Clarke and Jane Austen. I’m trying to work out how to make the conflict mechanic work well. Like in any design process, I’ve been through many iterations of it. At this point, the mechanic has come back around to looking more like it did at the beginning than it did in the middle, but there have been a few darlings to kill along the way—tying the mechanic to various period card games, for example. At each step of the way, though, the changes I’ve made have made perfect sense to me, as they are responses to things I found to be wrong with a previous iteration. Sometimes the flaws were seen instantly, just on thinking about the mechanic, and sometimes they were seen only after playing with the mechanic a bit to get a feel for it. In any case, the changes grow out of the previous mechanic.

There’s a real risk here. The final mechanic, whatever it may be, makes perfect sense to me in terms of the history I have gone through to get there. I will be able to point to each bit of its design and say “the mechanic is this way because…”. But to someone who has just picked up the game, and who reads it, that mechanic may look very strange. Avoid this! 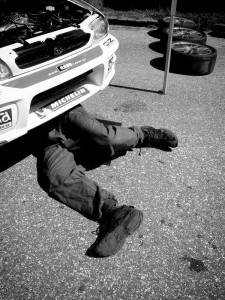 This is not the kind of mechanic I mean. Photo by Philip Bitnar.

Let me take this opportunity to talk a bit about some aspects of this kind of simplicity. In short, I don’t like gamey mechanics. This is something I like about Dogs in the Vineyard that I dislike about Mouse Guard. In a conflict in Dogs, the best move to make is always clear, or rather, is always as clear as your understanding of the fiction. In a conflict in Mouse Guard, there’s a best move to make in the mechanics, and you need to figure out what it is, and then make the fiction match it. I like fiction-first—that’s where my attention is anyway, so it had better be where the information I need to make a decision is.

In particular, in Dogs, your path to victory is basically the path that makes use of your character’s traits. If what you narrate brings the fiction in the direction of one of your traits, the mechanics reward you by giving you those dice. So you want to use those traits, and reinforce the narrative truth of your character by narrating towards what is written on your sheet. To do otherwise breaks some faith in the character. Game design is mind control, sure. And one tool for that is equating things—this bit of cloud is this bit of boxes, and vice versa. But when you say two things are equated, and then break that in practice, that weakens your game. A mechanic should help players maintain their faith in the fiction.