Hello all. Long time no write. We are hard at work on Et in Arcadia Ego these days, and that’s been the subject of many trips to the Baker Street Pub. While all of us had a feel for the genre and had our source material in mind, we kept having problems modeling that material with game mechanics. The problem wasn’t that the mechanics were bad—in a certain way, they actually accomplished the goals we set out to achieve. But we kept iterating on them, trying to make them match our inspiration, only to have them twist in our hands like so many fae promises. Last night we had a lot of progress stemming from applying some old-fashioned questioning our assumptions.

So there we were, kicking back a pint—well, Austin had a mojito, Kit had water, and I had soda—considering how to deal with the construction of a social graph during character creation. Arcadia is strongly focused on social webs and their navigation, as you would expect from a game that’s themed on polite English society in the early 1800s. We had this card mechanic and were overloading the suits to generate the kinds of relationships one has with other people in town. It was cute, because we had four suits, and four relationship types, and everything was close, but not quite right. The relationships were flat—yes, they’re family, but that doesn’t give me much to work with. We also had this notion of social capital, of drawing upon your connections to gain an advantage, with this semi-game-ish abstract resource. Only that wasn’t quite right either, because just because I loan you my carriage doesn’t mean you owe me a nebulous boon of equivalent size. So we were struggling. 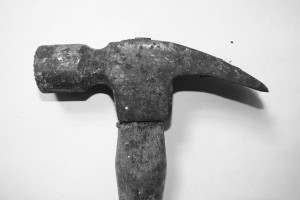 This hammer will make your game BETTER. Photo by Nina Hale.

The cracks really began to show when we asked ourselves the very basic question: “What is an NPC?”

It turns out that this question, while on-its-face dumb, is actually pretty deep. An NPC is a different thing in different worlds. An NPC might be a grand villain who opposes you at every step. An NPC might be a source of information about the plot, or perhaps a simple plot hook. An NPC might actually be a MacGuffin that people are looking for. When we created the rules for NPCs in Dragon-Guarded Road to Becoming Clay Heroes Land, we used the same trait-based system for our NPCs, but acknowledged that different kinds of NPCs held different roles in the story. It’s a lesson we needed to re-learn in developing Arcadia. And hitting on that helped us define what we needed to create.

In a more general sense, it’s easy for a group of indie game hacks to throw together a mechanic that sort of works and to try to polish it until it reaches where it needs to go. It is, however, wrong. Or at least wrong for us. For us, getting the best results requires working backwards from the intended product until we find a mechanic that matches the game we’re trying to build. Having all these tools in our toolbox makes it easier for us to back into the design. I believe this is why I get hives every time I see a lengthy post about Fortune Mechanics or Actor Stance. Knowing those concepts does indeed allow someone to discuss game design in a very theoretical and compact way. The danger is, using these terms can emphasize the tools used to model something over the thing being modeled.