First, let me just say that the word narrative is terribly overloaded in the game industry. Turn it this way, it means story. Turn it that way, it means the events in a game. Turn it yet another, and it’s a play style. Here, I’m using it to talk about genre. About the kinds of stories we tell with role-playing games. There are an almost innumerable number, each with a different narrative space.

I bring it up because I’ve been thinking about how we (Transneptune) determine which games to write. Yes, there’s a certain sense of designing for joy we do—writing the games we want to see. But a lot of times we talk about how to write games in unique narrative spaces. That is, that tell stories other game systems don’t tell. When we wrote Dragon-Guarded Land, it was to emphasize the genre elements of modern epic heroism in ways we’d never seen before. Writing Et In Arcadia Ego has been about understanding the heavy social elements of stories by Jane Austen and Susanna Clarke. And so on.

In retrospect, most of the role-playing games I’ve loved have come from intriguing narrative spaces. Beyond all the obvious (and previously mentioned) games, I’m talking about games like How We Came to Live Here, Penny For My Thoughts, and even old school Traveller—a game that, while quirky, knew what it was. They were games that brought a distinct flavor to the table. But of those, the ones that I hold in highest esteem are those that use their mechanics to outline the narrative space they’re trying to play in. 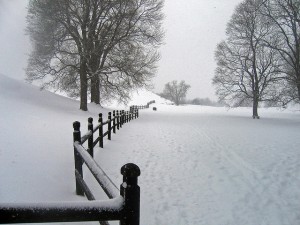 The hill is not the game we're playing. Photo by Sean Biehle.

I often abuse metaphors, so apologies if this next bit gets mangled. Imagine that each mechanic is like a fencepost hammered into the ground. Each mechanic serves to further delineate a space in which to run around. As long as we stay within their perimeter, the game shines. But if the space is too large, then people end up in different spots in the space, possibly far enough away that they can hardly even talk to each other. You want your fenceposts closer, to keep people together. Too close together and you’ve build a little fencepost prison.

We can, of course, imagine what our favorite games are like in this metaphorical field. Something like The Shab-al-Hiri Roach is a delightful but small pasture. Something like Dread has only one gigantic totem pole driven into the center, and it’s so cool and has such neat features that everyone stays near it. Something like Dungeons & Dragons is a field littered with hip-high fenceposts, every three feet in every direction, and you’re actually supposed to walk by jumping from pole to pole. Dogs in the Vineyard is a field with mechanics driven so that they only rise about an inch above the ground, but the bushes are cut into decorative animals.

But the point is sound: good mechanics help define the space for players to play in, and good games have mechanics that help players end up in the same place. We’re going to be doing a game tasting week in a few weeks where we play a ton of games just to get a sense of what kind of game they are, including 3:16 Carnage Amongst the Stars, Apocalypse World, Don’t Rest Your Head, and who knows what else. I’m really looking forward to experiencing these games and thinking about how they establish the narrative space they play in. What are some of your favorite games that have a strong narrative space? Any suggestions for obscure games to add to our list?