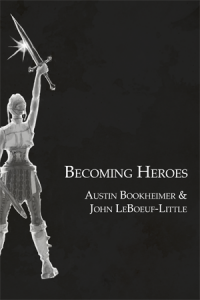 Becoming Heroes is a game of heroic fantasy, in the tradition of The Lord of the Rings or Star Wars, or Garth Nix’s Abhorsen series. Characters have great powers and greater destinies, but walk a narrow line. As Norman Mailer said,

“Ultimately a hero is a man who would argue with the gods, and so awakens devils to contest his vision. The more a man can achieve, the more he may be certain that the devil will inhabit a part of his creation.”

Good and evil in the world are reflections of each other.

It’s GM-run, but not GM-centric: the players have a lot of direct power over the story beyond their characters, optionally taking things like scene-framing and NPC-defining roles. It’s designed for at least six sessions of play, or many times that, depending on how far you can take a story arc.

If you get the book through CreateSpace, contact us to get a PDF copy.